“Jacqueline could feel herself succumbing to the lure of the books.  It was all she could do to refrain from taking one of the volumes, squatting on the floor, and starting to read. …. Jacqueline…wandered on, marveling at the breadth….There was an entire shelf on the Brontes, including the standard works devoted to their juvenilia.  Poetry, ancient and classical history….”  Elizabeth Peters, on the lure of books ….

Our last post told the triumphant tale of Gandalf, who refused to be evicted from HIS chair in the MPM Manor kitchen.  In this post we introduce the person who gave Gandalf to Barbara — and who shared an abiding love of — well, really addiction to —  books with her.  Chuck Roberts, owner of the WonderBook warehouse and bookstores, met Barbara in the 1980s after she had made her way out to the Frederick area, hoping to escape the growing sprawl and traffic nearer to D.C. (and finding her dream home in the process).  The two friends bonded over their love of books — and Star Wars, and Tolkein, and …. the list goes on and on.    Barbara went from renting videos at Chuck’s first small store to signing books for him to sell through his now sprawling warehouse-internet book emporium.  Neither one of them could ever stand to let a book get thrown out if it could possibly be saved …  and neither one of them could stop talking if a good Tolkein or Star Wars argument was underway.  (Believe us on this one.)  There was often quite a crew of book-lovers gathered at Barbara’s, including writer friends as well of course, and the conversation got more and more animated as the evening (and the drinks) went on….

If you look carefully at these pictures, you’ll see a quarter that was put in for scale, and also a very small copy of “Little Women” — which is an actual edition of the book!

Inspired by, but on a slightly different note than, Bookshelf Q. Battler’s pics, we bring you some “naturally occuring” battles and detentes among some of Barbara’s favorite fantasy-sci fi characters — as found on her bookshelves …. (Dobby looks worried about Scene It, while Leia and Obiwan seem to be mulling their answers over…??  Barbara admitted to crying when Dobby died …)

… an avid sci-fi and fantasy-genre fan, Barbara started reading science fiction at a young age; she and her father would frequently entertain the family at dinner with debates and musings on their latest sci-fi readings.  Her shelves were lined with Heinlein, Asimov, Edgar Rice Burroughs (not the Tarzan ones!), H. Rider Haggard, and other favorites — along with so many others that followed (Terry Pratchett and Connie Willis, to name just a few).  Readers of Amelia and other EP books will recognize the affectionately mocking send-off she often gave in her writings to some of those early authors — and of course always with a feminist undertone (take that, Indy J.!)

As soon as the first Star Wars movie came out, she lugged all friends and family members she could find to it.  At one point she was overheard planning a letter to George Lucas, explaining the schedule he’d have to stick to in order to get all 9 (yes, nine NINE, remember????) films out before she died.  It’s probably just as well she never knew that the new one was planned, as it would’ve irked her no end.  Early Star Trek was a staple for her (as a cat lover she would’ve loved to have one of those purring tribbles!!).   She read all the Harry Potter books as soon as they came out, and got to all the movies.   Long before Tolkien was “in,” she was re-reading the trilogy every December — a habit she imparted to several family members.  The last film she saw was the first of the recent Hobbit movies, into which she stomped with a portable oxygen tank and a large bin of popcorn.  Friends and family could always call her to try out their favorite theories on any of hundreds of sci-fi or fantasy series that she followed — she would amicably and energetically debate each point for hours.

As these pictures attest, Barbara couldn’t resist getting many kits for making various scenes from her favorite series….  which was why kids of all ages loved visiting with her.  This hobby wound up providing welcome amusement on bad days as she dealt with illness in her last years; she was working on Jabba the Hutt in the summer of 2013.  And of course anything with an Egyptian theme was pounced upon with joy.

However, our very favorite “bookshelf scene” is not from one of Barbara’s shelves, but from the shelf of a friend of hers — used here with permission.     Clearly, what Gollum always needed was some time under one of those sunlamps they use for Seasonal Affective Disorder!   (Right??)  (bottom right pic) 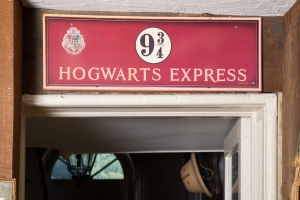 Two years after Barbara’s death, we who loved her want to mark the occasion in an appropriate way.  The heading above just begins to list her many passions; as one friend noted, “Barbara was an enthusiast!”  She was enthusiastic about her many hobbies — some of which originated in research she did for her books.  She was enthusiastic about her family and friends, the state of the world, her beloved cats, chocolate — and oh, did we mention … gin? (surprisingly, not whiskey!)

“Confound it, Peabody,” Emerson shouted … “Drink your whiskey like a lady…” (from Seeing a Large Cat)

Since there isn’t much to Barbara’s  recipe for a martini (wave the vermouth over the gin, add two ice cubes) (actually, just skip the vermouth part altogether) ….  we thought we should honor the occasion with a different recipe, one that was passed down to Barbara by her mother, who got it from a beloved neighbor in Oak Park, Mrs. MacDonald.  The aim of the recipe was to get as close as possible to the fabulous chocolate cookies that were obtainable at that time only from Marshall Field’s.

DUMP IT ALL IN A BOWL AND BEAT.  (Very typical Barbara rendition of a recipe)  DROP FROM tsp. ONTO GREASED BAKING SHEET, BAKE 7-10 MIN. IN MODERATE OVEN.

FROST WITH CHOCOLATE ICING (a couple of squares melted chocolate plus conf. sugar and water.  If you want to get fancy, add a little butter.)   (No wonder this was so popular.  Not much more work than a cake mix.)

This brings to mind one of Barbara’s favorite J.K. Rowling quotes:  “Professor Lupin was breaking an enormous slab of chocolate into pieces.  ‘Here,” he said to Harry, handing him a particularly large piece.  ‘Eat it.  It’ll help.'”

So, lift a cup of a genial beverage (your choice!) and have a bit of chocolate on Barbara.  She would tell you that there is no woe that cannot be cured by the application of appropriate food and drink …. (or perhaps other remedies of a similar sort — more on that soon!)