…AND NOW FOR SOMETHING COMPLETELY (local?) (different?)

And once more in response to some expressed interest, we’re posting this news on an upcoming local auction at Trout’s Auctioneers in Frederick, Maryland.  Items can be viewed on line, but there will not be on-line bidding (absentee bidding seems to be accepted, though).

Different parts of Barbara’s massive book collection will be showing up in various venues in upcoming months, and since some have asked for updates and news, we’re trying to oblige.  To Trouts went her collection of pop-up books.  (Yes, you heard us aright — she also collected pop-up books.  She loved how they folded out in amazing ways when you opened them.  One of her favorites (of which many family members and friends received copies over the years) was called “America the Beautiful” and featured scenes of the US accompanied by stanzas of the song.)  There are also some children’s books included in the Trout’s collection from MPM.

… there are certain beloved readers … you know who you are … to whom we are considering sending warnings  (**don’t go, you know you don’t need more books!!**)  (on other hand, most of us book lovers could use that warning!!) 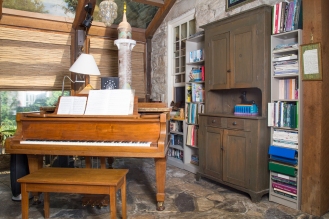 In addition there will be all kinds of non-book items (notice how we categorize stuff!), from a baby grand piano to the ornate shelving used to house Barbara’s extensive martini glass collection (when that woman got into something, she really got into it — and her “refreshing beverage” was definitely gin, rather than Amelia’s favorite whiskey & soda… ergo the ebullient display of martini glasses above!)

This is the kind of local auction at which Barbara loved to muddle about, coming home with various “treasures” after hours of happy digging of a non-Egyptological sort.  From a safe distance, we who don’t share that delight can simply point those of you who are “local” and similarly insane toward this latest outcropping of MPM madness… (…albeit, perhaps, with a *wistful backward gaze*)

Ps … a cheat sheet on the auction …

In response to those who’ve wanted help in checking out the upcoming Baltimore-area event, here are some short-cuts:

**No evil eyes on these cats!

**Another guy with classical good looks (do we detect a theme?)

**More Egyptian-themed things (do we detect another trend?)

**Not Emerson’s chest (for obvious reasons)

**OK, antique  furniture for those of you who find it   interesting (sorry, still scarred from too many antique show expeditions as a child to get into this….)

**Although, this one is kind of fun

**And these all match

**Ooh, these match AND you can eat food on them!

**And this could be useful for seeing yourself …

**Again, not Emerson’s manly chest as Amelia likes to describe it…

**Running  out of things to say  about all this

**Of possible interest to pie lovers

**Never heard of a lap desk before … kind of a cool idea, though

**Egyptian revival furniture? at least it has Egypt in the title….

**The horse is definitely cool

**While we’re on the ghost stories, there’s this…

For fans in the Baltimore area….

… and people who, like Barbara, are into antiques….  (unlike some (not all!) of Barbara’s progeny, for whom being dragged to antique shows ranked lower than going to the dentist).

There are going to be several events coming up in the Baltimore-Frederick area in the next couple of months that will feature some items from Barbara’s estate.  One part of this effort will involve bundling part of Barbara’s (incredibly massive) book collection into themed parcels .. including, for those of you following recent exchanges about this on Facebook’s “Another Shirt Ruined” group — her H. Rider Haggard collection! (Be forewarned, Barbara used her books with gusto — they were there to be read, not looked at!  She boasted that as a child, her father teased her that he never knew what food items might show up in a book she was reading….) (Chocolate ones preferred, of course.)   Some of this will be cataloged online, while some will just be up for viewing at the event sites.

We mention this in case you’d like to see things from the grand to the little and silly from Barbara’s life.  (To be clear, this is about sharing the fun, not urging anyone to buy anything…. there will be plenty of collector-types, just like Barbara, to do that!)   You can eyeball some things online — but the actual display in the galleries may be fun to browse in person if you’re in the area (and it’s free to go see it!).

SO, the first event is at Alex Cooper’s galleries in Towson, Maryland, on April 7 and 9.  The official catalog features the big items — but there should also be some smaller, Egypt-themed silly stuff on display.  (Barbara prided herself on never losing a child-like sense of humor and fun, so she delighted in kids’ toys and collected Lord-of-the-Rings stuff of all kinds….)  Not sure yet about the books, but will update as we can.  And oh, all right, yes, there’s some furniture (yawn)(sorry, still can’t get excited about it!).

The Cooper’s brochure gives a few more details, and there are online pictures of some stuff, including that great carousel horse (the only ride she really enjoyed at amusement parks — but she would ride that one numerous times, chortling as she went!) — and of course there has to be a woman with a cat! 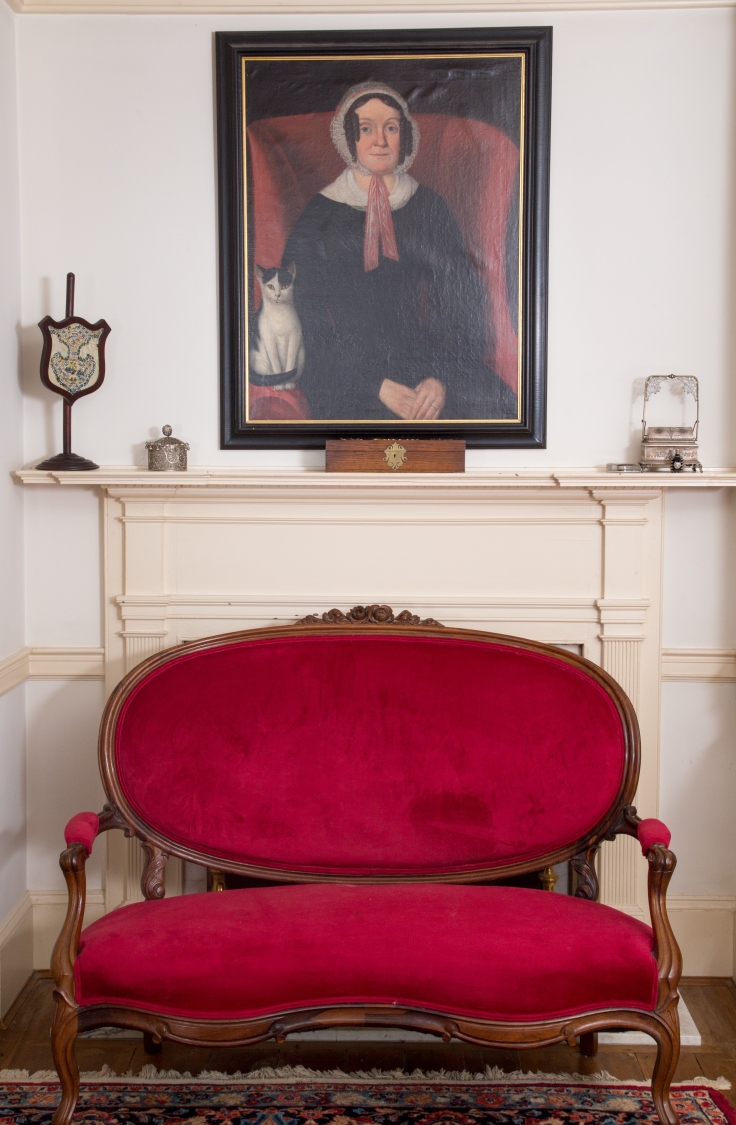 Postscript on Vintage Barbara: send us your pics!

To any friends and fans who might have wound up with some of Barbara’s vintage collection:  we’d love to see you in costume, or to see how you fixed up any part of the collection you might have gotten!  (Because of logistics and the size of the collection, the home crew couldn’t go through all the items and photograph or catalog them.  But we know for sure that we have pics of Barbara in some of the items, so we can trade photos….) 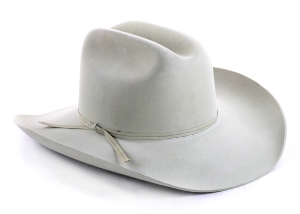 Here, for example is the white cowboy hat that was sold at the auction, and ….. 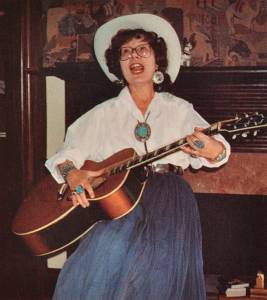 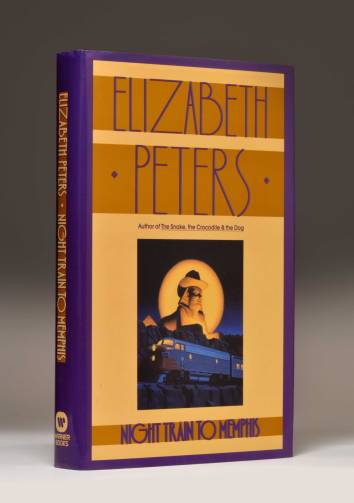 …. here you see Barbara wearing the hat as she tries to get us to believe she is actually a country-and-western singer.  (It looks like this was a time when she was really into southwestern jewelry, although she certainly started being interested much earlier, while visiting her parents out in Arizona.) …..aaaaand, look who else is wearing a very similar hat on the cover of Last Train to Memphis!  (Photo credit for the picture of Barbara is to Kristen Whitbread, and for the pictures as formatted here to William Joy… thanks!)

SO if anyone has pics of recently acquired EP vintage stuff, please send them to us at

(and let us know if it’s okay with you for us to post them!) 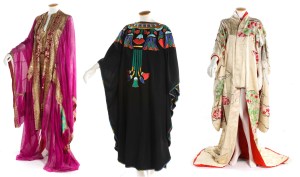 “My own frock was a new one, and I had put aside my heavy working parasol for one that matched the dress … ruffles and lace concealed its utility” AP, Ape Who Guards the Balance

It turns out that Barbara just couldn’t write about things without doing intensive research … at least maybe that would have been how she thought about the collection of clothing, hats, and even parasols that she amassed over the years!  Or maybe it’s just that she was an enthusiast and jumped into every new discovery with Amelia-like passion and thoroughness…

It’s been amazing to see the kind of depth Barbara went to in investigating so many details that went into her writing; her bookshelves are lined with references on so much of the background information — from clothing of different eras, to all kinds of aspects of Egyptian history, to jewelry and plants and …  (the list just keeps going!)

Writers of historical fiction who do their homework seemingly have to know about everything from capes and hats to undergarments … and Barbara’s own collection included some of everything.  The collection is on display right now on the Alex Cooper website — we’re not advocating that anyone but collectors buy anything — but just thought fans might have fun browsing through the offerings.  There are Egyptian robes and Victorian clothes and some items that clearly were just for fun.  The collection echoes not only of Elizabeth Peters characters, but also of Barbara Michaels at points …

We note that one of the parasols is a bit cracked at the end — perhaps due to the kind of vigorous prodding for which Amelia was infamous???

“I approached Alberto and jabbed him in the waistcoat with my parasol.  He jumped back.”  AP, Crocodile on the Sandbank

Knowing Barbara, this seems quite possible!